I love finding hair and beauty inspiration in unlikely places. Especially when the catalyst leans borderline bizarre. The key to making sure you don’t actually look bizarre, however, is to translate what you’re inspired by in a way that’s subtle, but not altogether non-referential. For those who watch Project Runway, you probably understand what I’m saying. I can hear Michael Kors in my head right now whining about how so-and-so’s frothy frock is far too literal when a muted allusion would have sufficed.

Anyway, the mythical hairstyles tutorials in today’s roundup are all inspired by mythical creatures with a girly, feminine edge. I advocate amping up the wow factor with thoughtfully applied makeup and the perfect “look at her!” outfit.

I’m all but drooling over this unicorn-inspired ‘do, a design by hairstylist Amy Farid of Free People that was featured in their Sidewalk Safari Lookbook. The hairstyle recreate steps are thoroughly detailed on the blog — both picture and text wise — and I promise it’s simpler to recreate than you’d think. I love the mystical-meets-boho vibe the end result takes on. This one is rich with styling possibilities. 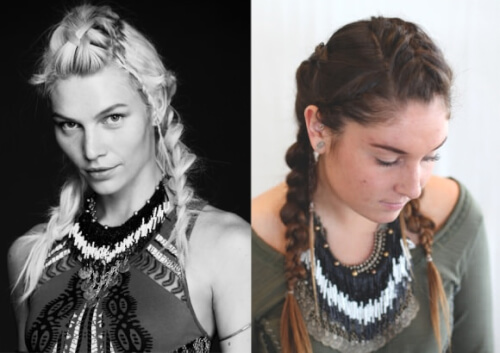 Here’s another braid of sorts, only this one is inspired by none other than a woodland nymph. I’m swooning over the strategically placed daisies, but this hairstyle would look lovely with or without floral furnishings. I also like the idea of nixing the flowers and instead placing a crown (floral or otherwise) atop your noggin’ instead. Check out the full video tutorial by YouTube user x3Haha. You’ll find that the look is surprisingly easy to do yourself.

When I think about mermaid hair, an image of cascading waves immediately pops into my head. Which is precisely why I’m so in love with this mermaid inspired updo by Carnie of Wild-Spirit — it’s the exact opposite! She’s rocking a thick mane of blue/teal hair, but any color suits this style, including those of natural origin. Check out the blog for both a video and picture/text tutorial and then head to the beach!

This isn’t just any elf inspired hair tutorial. Nope, this one is an elf princess inspired hair tutorial, brought to you by the elegant YouTube user, PeaceMilly04. Her calming voice puts me to sleep (in a good way)… Anyway, this hairstyle is ultra, ultra pretty and will have people oohing, ahhing and begging you to share your secrets. I can’t emphasize the amount of prettiness this one exudes, so make sure you check it out.