Half-Up Half-Down Hairstyles With a Twist

Your standard half-up hairdo is fine in a pinch, but if we’re being honest (and honestly is a virtue) it leans a little blasé. However, with just a bit more effort, you can create half-up half-down hairstyles that pack way more visual pizazz.

Take your cue from hair bloggers across the Internet, who’ve recently revived the half-up do. Only instead of the typical, half pulled back hair, they’ve added a twist to the look (sometimes literally).

For example, a few weeks ago Kate Bryan of The Small Things Blog collaborated with Real Simple for some appropro holiday party hairstyles. One of her easiest creations — and prettiest, in my opinion — was her half-up twist hairstyle. Says Kate, “It’s easy, quick, and not very involved: Just twist it and go.” 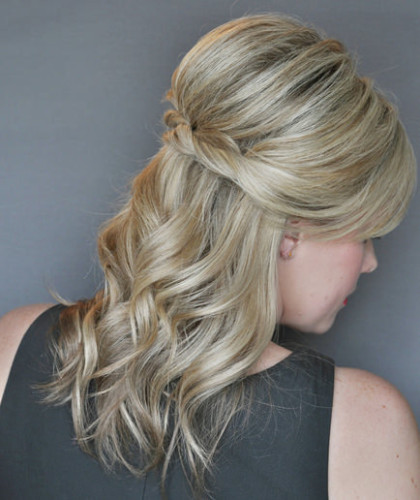 She created volume at the crown by teasing her hair — a great trick for those with either short or thinner hair who want more impact. Check out her step by step video tutorial below.

YouTube user ForeverYours0727 created a similar half-up look inspired by The Bachelorette’s Emily Maynard. Instead of twisting the two sections back, she created low, loose braids and connected them at the crown. For a less severe look, she allowed for some face framing fringe.

For another take on the twisted half-up hair, create a fishtail braid from the two twisted sections and secure with a clear elastic. The messy fishtail braid pictured here from Refinery29 has a more warm-weather vibe to it, making it perfect for any tropical travelers gearing up for their winter vacays. 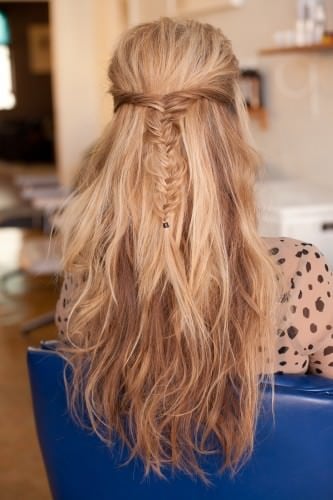 One last idea that I’m really digging is the celtic knot half-up half down hairstyle. Mimi from LuxyHair breaks it down into easy-to-understand steps. She even demonstrates with string before moving on to hair, which I found extremely helpful. 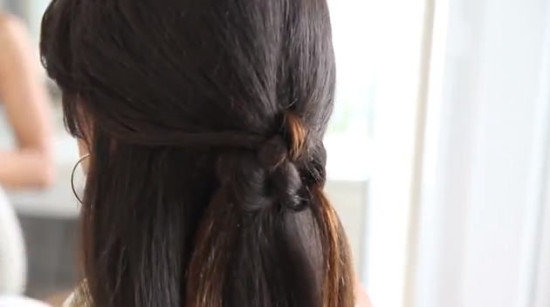 For even more half up hair inspiration, check out our Half Up Half Down Looks pinboard on Pinterest.