21 Buzz Cut Ideas for Masculine and Stylish Guys in 2022

A buzz cut is a very short haircut, usually all around the head, and close to the scalp using electric clippers. This wake-up-and-go haircut has been around for over a century and for good reasons!

First to set the trend for buzz cut lengths were celebrity hunks Kanye West, Zac Efron, Ryan Reynolds, and Channing Tatum – even sticking to the buzzed style and making it their signature look! Practicality, easy maintenance, and serious style are only some reasons why this cut is prominent among military and modern men alike.

The shaved-head look might be the first idea to get into your mind when you think of buzz cuts, but there are plenty of other versions available now. Modern styles include both short and long buzz cuts that are combined with a beard or matched with a fade, especially when the top hair is left long.

Professional hair designer and barber Sean Avitan incorporates dope designs and colors in his buzz cut creations, proving that you can go extra and get creative even with short hair!

Before your next hair appointment, check out these updated photos of the buzz cut. 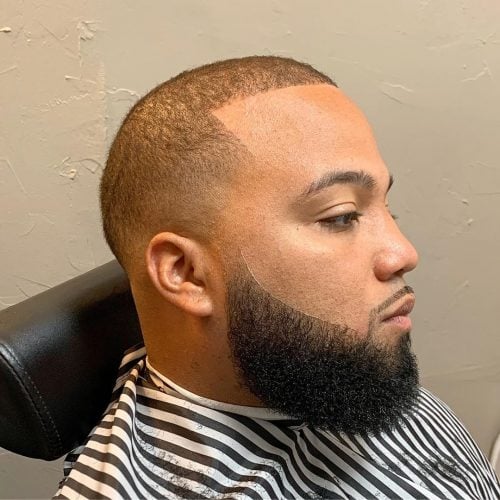 Who says balding guys can’t flex a new buzzed haircut? With this buzz cut style, you can use your thinning hair to your advantage. Plus, your facial hair will look super duper cool with your new do!

A faded buzz cut and beard for thick-haired men is the ideal look for men not wanting to deal with their thick, medium to long-length locks. It is a perfect way to cover bald/ thinning spots, making them less noticeable. Style this haircut by sporting a beard to create a scruffy, lived-in look.

Buzz Cut for a Receding Hairline

A great way to add freshness to a traditional buzz cut is by creating a mohawk-inspired buzz cut. A clean skin fade may look easy but cutting this close to the skin without irritation and precision is no small feat. Special clippers are the tool to use. The buzz length mohawk slims down the head shape, and the angles pull the eyes inward, giving the illusion of facial elongation.

A buzz cut with a hard part is the perfect cut for men who like the ease of styling. The barber’s use of a straight razor to etch in the part offers crispness and a modern edge to the cut. You won’t have to spend a lot of time in front of the mirror each day to maintain the shape and length. A fresh haircut should be done every 2 to 3 weeks.

While it may look like your normal buzz cut, this undercut variety is unique for its uniformly shaven sides. You can still style the remaining hair however you want while keeping the rest spic and span.

Enjoy the buzz cut while sporting the good ol’ ivy league style. Get the sides shaved then style hair on top for a wonderful hair combination.

Generally short but still longer than the usual buzz cut, the butch cut can be your ticket to keeping things neat while having enough hair for a grow-out.

Plain and simple—these military buzz cuts emphasize tidiness and orderliness. Shaved up sides with a little buzz growing up top to ensure no stray hair is in the way of the mission.

You can wear a buzz cut and still have a relatively thicker mane on top using a number 3 clipper guard. A natural look for youthful dudes, this one’s a must-try at least once in your life.

Sport this fade buzz cut by rocking out clean edges and a mid fade that clears up to the nape and ear area. Popular amongst older men, this cut lets hair regrow in a much healthier state.

The drip in buzzed styles like this is oozing! A clean edge and some drop fade is the trick to highlighting the buzzed top. Get the look courtesy of your favorite professional barber and his most trusty clippers.

Named after the fresh guys that join the military, this is one of the cleanest buzz cuts out there! The military induction buzz cut is simple, leaving some hair stipples for growing out and head coverage but keeping it short to give that orderly look.

A crew cut buzz cut is such a timeless style for all men! This one gets rid of stray hair around the face, revealing your most dashing self. Characterized as low-maintenance and an on-the-go cut, use clippers with a comb guard to achieve this cut.

High Buzz with Line Up

This is a high buzz cut with a line up, created by stylist Harry Hickson of the UK. “I’d say the best thing about this look is how clean and sharp it is. It’s more than just a buzzed cut; it looks a lot fresher,” says Hickson.

If you have a strong hairline and you want no hassle with styling your hair, this could be a good look for you. Hickson adds, “It always looks better on darker hair because you can see the fade a lot more.”

This burr buzz cut is a mid-bald fade with a #2 on top. “I would describe this as a simple look that never goes out of style. It’s really practical and easy to maintain with no product required,” states the California-based barber, Nektaly Ramirez.

“This haircut would fit best on a variety of hair types – straight, coarse, and wavy,” Ramirez adds.

Here’s a number 4 buzzed cut that’s convenient, clean, and easy hairstyle. Created by barber Wilsidson of France, he says “the good things about it are you wake up, and your hairstyle looks fresh.”

Wilsidson warns that not everyone can get this hairstyle. You would need to have a quiet straight front hairline, and it would look better on thick hair type.

“You can do it any time of the year, but people prefer doing it in summer because it’s easy to wear,” Wilsidson advises. “If you wear a beard, you can do a very sharp beard with a low or high fade or wear it naturally thick and wild.”

The high and tight buzz cut is a short, simple, and classic men’s cut, which is and always will be fashionable. This particular one was created by Malta-based barber Gary Nelson. “It’s a buzzed top and faded sides that usually uses an electric clipper to achieve,” he notes.

“Although there are various ways of buzz cuts such as the uniform cut or butch cut, this cut is skin-faded from the side and cut uniformly from the top using the #3 clipper guard,” Nelson describes.

“I would advise men who are considering this chop to trim their hair at least once every week or two weeks to keep it clean and tidy and maintain the style, especially from the sides,” Nelson points out.

A Buzz Cut with Beard

This is a low Caesar and a skin taper with a beard and line-up enhancement. It was designed by stylist Adrian Roman from New York. “My favorite thing about this cut is looking at the pop of contrast that the skin taper brings out in the sides and back. It gives it a cleaner and fresher look,” he notes.

Also, when using enhancements for this Caesar buzz cut look such as dyes or airbrush, Roman recommends using a shampoo with no alcohol content to extend the life of your enhanced look.

This long buzz cut is a mid-zero fade blended tightly with the top. Then, it’s taken down to a finger-width length with as much texture worked into the top as the hair would allow. Stylist Matt Dutfield of the UK created this cut.

There are several things that Dutfield would advise to people who consider getting a buzzed cut. He starts, “First has to be the hair type. If you have lighter or fairer hair, this isn’t the style for you because of how short you take it on the sides. You’ll never really get enough contrast to make the cut pop, which you find with darker or thicker hair.”

Another point to note would be hair growth patterns or, more specifically, cowlicks. “While not a complete roadblock from getting this haircut, I always suggest going short enough on the top to eliminate as much of the spiral as possible,” Dutfield emphasizes.

A buzzed cut with a skin fade offers a fresh and authentic look.

Created by Carlos Cuevas, a skilled barber from Mexico, this haircut is for someone looking for an exclusive style.

“This haircut is almost for any kind of face type. Except if you have an asymmetric face with a bit long ears. If that’s the case, you should opt for another look with longer hair. This look is not recommended for people with professional jobs,” Cuevas points out.