5 Things You Should Never Say To Your Hairstylist

We already informed you of all the things your hairstylist wishes you would say and the questions you need to ask, but are there any topics that are totally off limits — or that should be off limits — when you sit down in that chair? Turns out, there are! We asked four hair gurus (and one personal safety expert) to spill the beans on the phrases they never want to hear uttered in the salon. 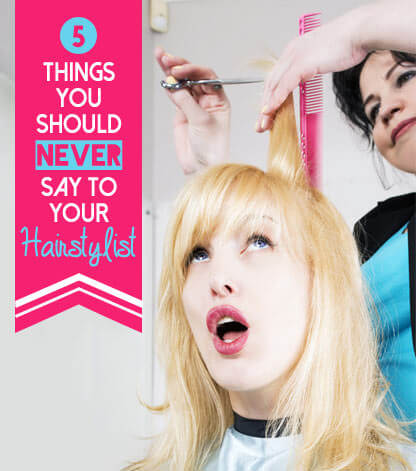 This phrase irritates your hairstylist more than you know. Instead, suggests Sammy LaQuale, licensed cosmetologist and sales consultant at Masello Salon Services of New England, be specific about what kinds of styles you like, and bring in at least three photos to show your stylist. Once you’ve decided on one, ask for the price upfront. “We don’t want you to get your great new do and then have it be soured by sticker shock,” explains LaQuale.

2. “What box color can I use in between appointments?”

According to NYC-based hairstylist, Kristine Murillo, the answer is NONE! “As stylists, we spend a lot of time and money staying educated on color theory, and we truly care about the condition of your hair.” By using a box color in between appointments, she notes, you’re not guaranteed the same results. “If the color comes out too dark or doesn’t match, we can’t simply ‘fix it.’ It’ll require time, possibly result in damage and end up costing you more in corrective color than if you had your roots touched up every few weeks.”

3. “OMG, last night I hooked up with this really hot guy…”

We’re sure you did, but as celeb stylist Nelson Vercher advises, try to keep things as professional as possible. Discussing your sex life or talking about topics like money or politics might make your hairstylist feel uncomfortable. If you love him or her and want to remain a client, respect those boundaries.

Even if your hairstylist doesn’t give you the exact cut or color you envisioned, resorting to profanity to express your displeasure isn’t going to benefit anyone, says celebrity hairstylist Angelo David of Angelo David Salon. Keep in mind that they’re also working for tips, so they want to please you. “If there’s something that bothers you though, speak up, but be cordial.”

“Women often share more information with their hairstylist than they do with their husband, pastor or friends,” says CEO of IM-SAFE and women’s personal safety author, speaker and workshop leader, Dennis Golden. “Just ask yourself how many conversations you’ve overheard at the salon that have included detailed dinner plans, marital issues or the dates of upcoming trips.” You’re in a public place, so remember: any information that you share here can be picked up and used by the people near you.

“One of our clients found that out the hard way,” notes David. She was overheard telling her stylist that she was going to be out of town for ten days. When she left the salon, another customer followed her home and later proceeded to tell her boyfriend (who had just gotten out of prison) when it would be safe for him to break in.”